One of the many beautiful things about Las Vegas is that time doesn’t really matter; it may or may not be 5 o’clock somewhere, but nobody’s keeping track in Vegas (the absence of clocks in casinos certainly helps).

Although there’s never a bad time to eat or drink in Vegas, there are some especially good times. So let’s talk about some of my favorite Happy Hour deals to further maximize your dollar when you want to treat yourself to something a bit fancier than free drinks in the casino.

Pizza Rock boasts an impressive happy hour menu, including a variety of appetizer, drink, and personal pizza specials. They’re open until 2am, so the 10pm-close window gives you lots of time to get some delicious food to soak up all of that free booze you’ve been drinking and/or to keep the party going with $4 wells and $2 off draft pours or wine.

Don’t be tempted by the instant gratification of the New York style slices at the counter when you walk in; head back to the bar for instant seating and the ability to take advantage of their amazing Happy Hour menu, including the best pizza downtown. I can’t overstate how good their pizza is… I’ve been known to literally set an alarm on my phone for 12:30am to ensure that I make it to Pizza Rock before they close.

Evel Pie serves up some greasy New York style pizza in an Evel Knievel themed dive bar that oozes punk decor and attitude. Although the pizza isn’t as good as Pizza Rock’s more gourmet offerings, if you’re jonesing for a midday weekend pick me up to fuel your bender, it’s a great way to rally (plus, as the cliché goes, just like sex, there’s no such thing as bad pizza…)

Sergio’s Pick: A $5 slice and brew

Flamingo | Near Margaritaville and the Linq Promenade

Bird Bar (the former 5 O’Clock Somewhere Bar) is located in the Flamingo, next to Margaritaville and close to the Linq promenade. There’s a drink rail and some bartop video poker machines (with horrible paytables) on the upper deck, and beer pong tables on the lower deck. Outside, there are some tables under umbrellas, and a drink rail (with chairs) along the Las Vegas Strip that provides a great vantage point for people watching.

From 5-6pm every day, Bird Bar offers a great deal: 50¢ beers (12oz domestic drafts, usually Coors Light or Miller Lite). I believe they also have a $1 special on a sickeningly sweet cocktail, as well as other drink specials, but I’m usually too busy double-fisting my 50¢ beers to notice. Although longtime Vegas goers will decry the 1000% inflation from the days of 5¢ beers at the 5 O’Clock Somewhere Bar, it’s hard to beat 50¢ beers on the Strip in a prime people watching location.

Monday-Saturday: 4-7pm, 50% off everything on the menu

The Downtown Cocktail Room boasts skilled mixologists and an imaginative cocktail program in a swanky setting. Their seasonally-rotating cocktails are rated on a “DCR originality” scale, ranging from a more traditional 1 to an eccentric and inventive 5. Being the adventurous drinker I am, I’ve had cocktails featuring exotic ingredients such as flame-broiled marshmallows, boba balls, banana runts, and aquafaba. Although the drinks are pretty spendy at full menu price, they’re expertly made and an incredible value at half off (especially considering their strength… two or three will have you feeling a good buzz)!

Getting in can prove a bit difficult, so don’t be scared away. Hear me out: when you get to the indentation in tinted black windows, turn to your left and… push on the wall. Your leap of faith will be rewarded as the door swings open and invites you into one of DTLV’s best kept secrets.

Note: the Downtown Cocktail Room is closed on Sundays (it’s supposed to be a day of rest, afterall). Not that I could afford it without the Halfy Hour (which is supposedly a “limited time” offer, but confirmed through at least 2019).

Sergio’s Pick: As many half-off craft cocktails as you can drink in 3 hours

Do you have any favorite Happy Hours that I didn’t mention? Let me know down below in the comments! 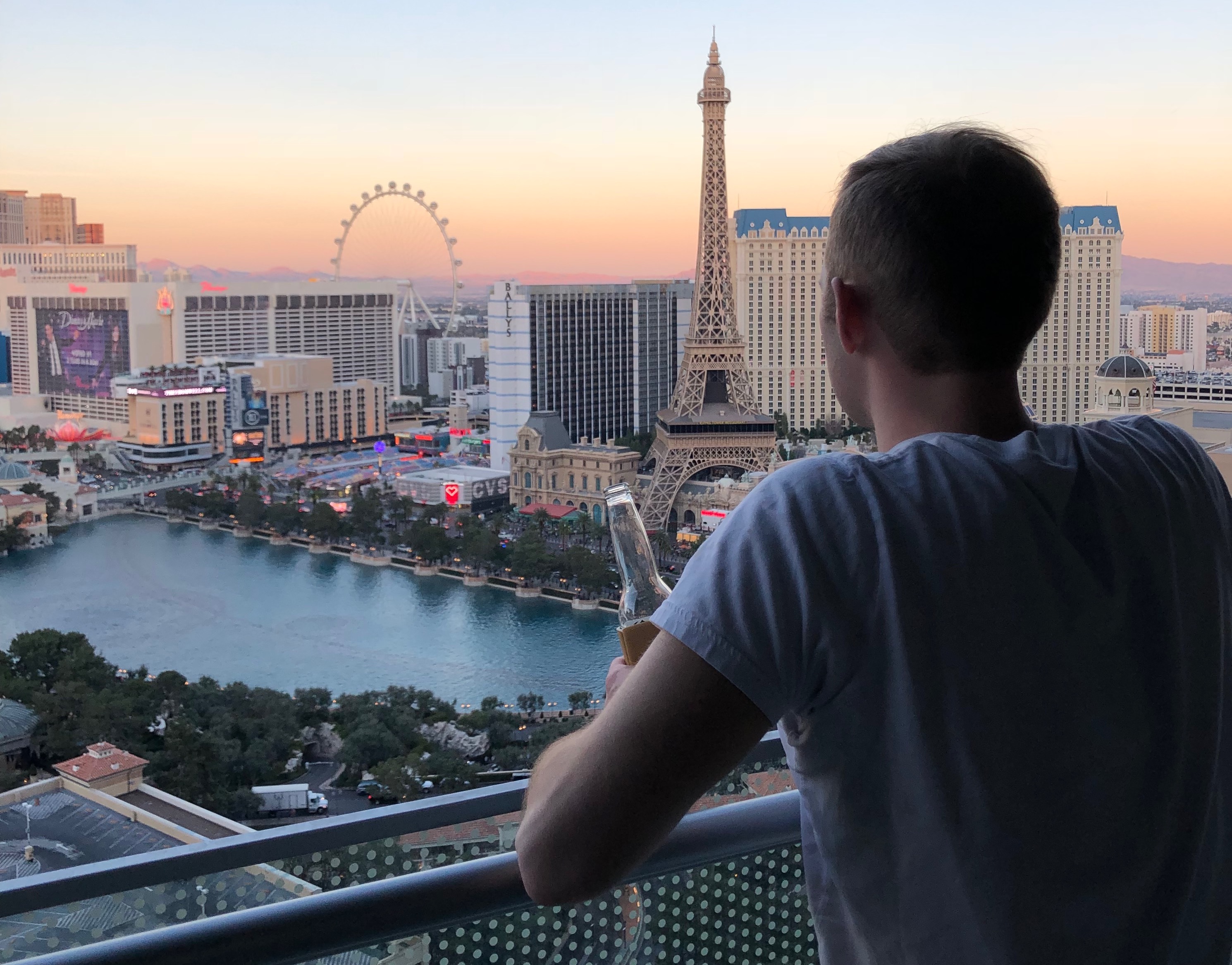 I want to help you live like a high-roller… without breaking the bank. With my beginner-friendly guides, you’ll be enjoying Vegas deals in no time. Take a look around my site, click on the bold blue links for more information, and follow me on social media!